Posted on October 5, 2018 by bootleggerbay

What does a girl have to do for a little adventure? Volunteer on a Sea Shepherd vessel of course! Fulfilling a long time goal, a few months ago I found myself barreling through the Mexican outback on a bus from San Diego to San Felipe, a frequent destination of mischievousness in my younger days with my Ramona mates. 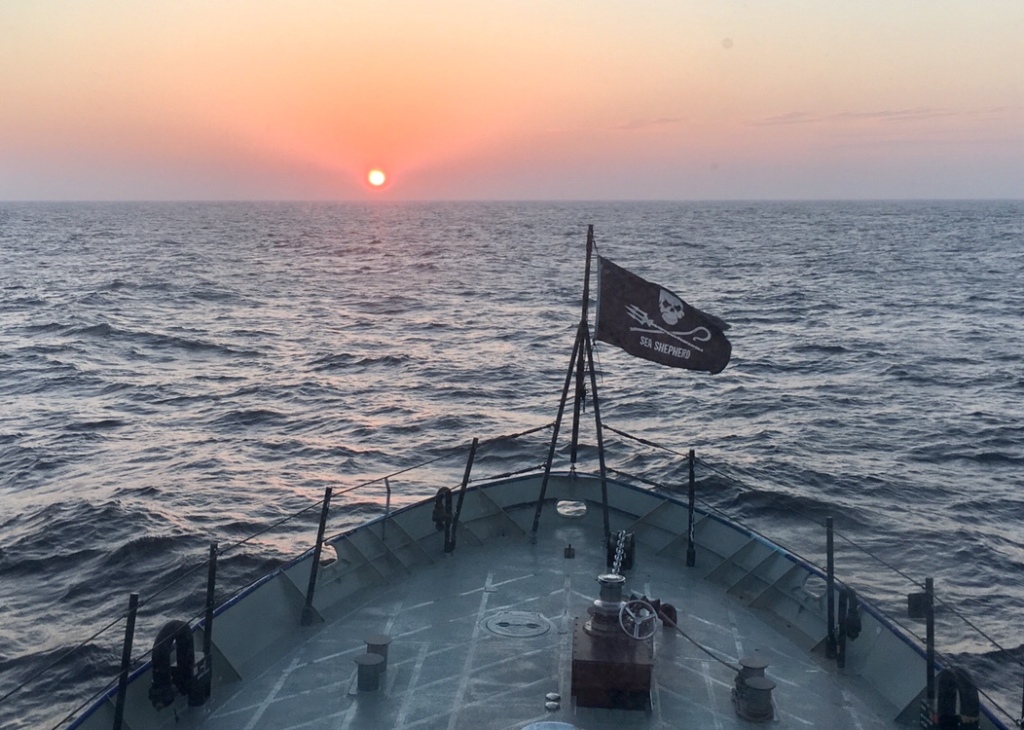 How surreal to return so many years later to help the ocean and her inhabitants. The sea has been my playground, provided my living and stolen my heart. It was time to give back to the ocean.

Sea Shepherd Conservation Society, an international NGO, non-profit, direct action group, backs up its mission statement: “To end the destruction of habitat and slaughter of wildlife in the world’s oceans”, I too wanted action!

An international volunteer crew of various ages and backgrounds joins the fleet of 11 power vessels and one sailing ship, without knowing where the campaign may take them, which adds to the adventurous spirit of the crew. Peacefully armed only with passion and enthusiasm and fueled with some of the most inventive, hearty and delightful vegan deliciousness, our crew share a work hard, laugh hard camaraderie and push ourselves beyond our previously perceived limits, all for the sake of wildlife that need our help.

I stepped aboard the 110’ former US Coast Guard cutter M/V John Paul DeJoria, named after her generous benefactor. I was assigned 2nd officer on the bridge, and quietly thrilled at being handed the helm after a very short briefing. Maneuvering the dual engines while the foredeck crew pulls up discarded illegal nets was a dream job indeed. My first sight of a bat eagle ray being freed from the net and gently returned to its home to swim away was a moment I won’t forget. I couldn’t have been more honored to be a part of “Neptune’s Navy”.

One adjusts to living in tight quarters even when sharing a cabin with six rotating armed men from the Mexican Navy, Marines and Fisheries Dept.

The partnership with the Mexican military was due to the violent nature of illegal panga fishermen, filled with greed at capturing their prize, the swim bladder of the endangered Totoaba fish which fetches huge money from the Asian black market.

Our mission was to search for and retrieve the nets left behind, which trapped marine life including the nearly extinct porpoise called Vaquita, of which less than 10 are estimated to live only in this refuge of the Northern Sea of Cortez.

Operation “Milagro” has so far pulled up over 100 miles of nets and saved over 3000 animals including 1 humpback whale, 1 endangered Pacific leatherback turtle and 21 sharks.

Our ship was due for routine repairs and bottom painting, we headed to the shipyard in Mazatlan. During our crossing we were thrilled by visits from humpback whales and a nighttime display of “glow in the dark” dolphins, lit up by phosphorescence as they cavorted in our bow wake.

After repairs we learned of our next destination: Peru! Maritime tradition had us float across the equator while first timers or “polywogs” earned “shellback” status by diving in and swimming across the imaginary line.

A brief re-fueling stop in the Galápagos Islands gave us a chance to see the famed marine iguanas and blue footed boobies, along with snorkeling next to black tip reef sharks!

Sunrise watch found JPD surrounded by several pods of sperm whales, much to the delight of the crew who always stop what they are doing, including sleeping, for wildlife viewing.

The only dock available in Lima was stern to, in Callaou, surrounded by hundreds of small fishing vessels that operated 24/7 in a frenzy to pull in as many Humboldt squid as possible during the season. The noise, the smell, the soup of discarded squid parts floating by; suffice it to say, it was not the most beautiful harbor, yet we were rewarded with a shore leave to tour Machu Picchu. A spontaneous, whirlwind trip to Cusco, then bus and train to the fabled mountaintop site, Machu Picchu leaves one breathless and not just from altitude!

Back to work, next stop, the fishing harbor of Chimbote, Peru. The largest illegal fish factory vessel “Damanzaihou” looms out of the early morning mist as if in a horror movie. Our job is to document this beast at anchor and help the Peruvian government prevent it from plundering more illegal hauls. A few crew line their deck and wave curiously at the drone as our expert drone pilot dodges curious seagulls.

Next stop, Panama Canal. When I opened the door to the bridge for my favorite 0400 watch I heard “Riders on the Storm” which accompanied a lightning show as if timed to the music played by our 1st Officer, who has an enviable playlist.

Three months onboard went far too quickly, as the ship became such a familiar home, with an ever changing crew and ports to keep things interesting.

Ocean lovers; to learn about, donate or buy a t-shirt, visit: seashepherd.org